An Intrauterine Insemination (IUI) is a type of artificial insemination in which sperm is injected directly into your uterine cavity near the time of ovulation. This procedure can be executed either with your partner’s sperm or with sperm from a donor. During natural conception, sperms have to travel from the vagina through the cervix into the uterus and up to the fallopian tubes where the egg has reached from the ovaries. In IUI, sperms are washed and concentrated in the laboratory and are placed directly into the uterus which puts them closer to the egg. This process can increase the likelihood of pregnancy in couples who are finding it difficult to get pregnant.

How is an IUI performed?

Intrauterine Insemination is considered the first-line treatment for unexplained infertility, mild endometriosis, or mild male factor infertility.In general, Intrauterine Insemination (IUI) does two things: medication taken before the injection help stimulate the growth of eggs, making a woman more fertile than she would be without the medication. Then, via the injection, the sperm is placed inside the uterine cavity, avoiding having to swim through the cervical opening and into the uterus on its own, allowing it to meet the egg more easily. During the procedure, the male partner will be asked to provide a semen sample about an hour or two before being scheduled for insemination. This is done by masturbating into a sterile container at the doctor’s Hospital. The semen is “washed” to separate the sperm from the seminal fluid. This must be done before the sperm can be injected into the uterus because the seminal fluid contains substances that can irritate your uterus. Sperm “washing” may also improve the ability of the sperm to fertilize the egg. The insemination takes only a little minute. A fertility specialist will place a speculum inside the vagina, insert a small catheter through the cervix into the uterine cavity, and inject the sperm through the catheter into the uterus. During this IUI procedure, the patient will most likely not feel any discomfort.

Intrauterine Insemination is less expensive than IVF, and is usually covered by insurance, making it an accessible, popular and minimally invasive procedure.

Who all can be helped with IUI?

• Unexplained infertility
• Mild endometriosis
• Issues with the cervix or cervical mucus
• Low sperm count or decreased sperm motility
• Issues with erection or erectile dysfunction
• same sex couples wishing to conceive.
• Single woman wishing to conceive.
• A couple wanting to avoid passing on a genetic defect from the male partner to the child.

IUI is not helpful for the following 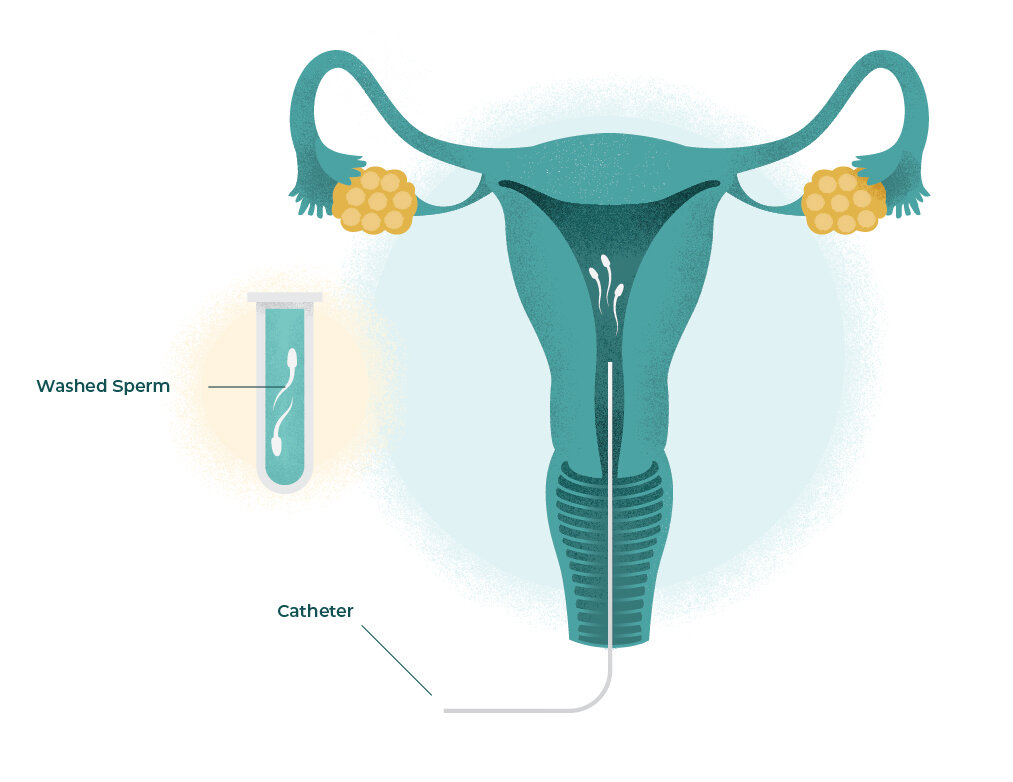 How is IUI done?

IUI can be done in natural cycle or it can be combined with fertility medicines or injections. First of all your doctor well examine you and your partner and ask for some investigations like ultrasonography of the female, check for the tubal patency and a detailed semen analysis. Once decision for our IUI is taken then your doctor will either follow your natural cycle to decide when are you about to ovulate so that timing of IUI can be decided. If medications are prescribed usually they are to be taken from day two or three of your periods. About a week after starting the medication you will undergo an ultrasound Depending on your ultrasound your doctor will determine whether you are ovulating or not. Usual time for ovulation is 10 to 16 days after starting the medications. If your egg is developing properly then an injection called trigger injection is given to ovulate at a predicted time your male partner will be asked to provide a semen sample on the day of procedure or the donor’s sperms obtained from sperm bank will be thawed on the day of the procedure. The sperms will be taken to lab where they'll be washed and healthier most sperms are separated. This is called semen preparation process where seminal fluid and other debris are removed so that the sperms are very concentrated and in a small quantity. The sperms are injected directly into the uterus.

Is IUI painful or does it require anaesthesia?

IUI is a quick and typically painless procedure and there is no requirement of anaesthesia. You will lie on a examination table and your doctor will use an instrument called speculum to gently open the vagina and see your cervix. Then the washed and concentrated sperms are loaded in a very thin tube called IUI catheter which is passed through the cervix and placed into the uterus. Very gently the sperms are placed in the uterus and this procedure is very quick taking not more than 5 minutes. You will be asked to take rest for 15 to 20 minutes following the examination. Most women experience little or no discomfort at all although some women may experience little discomfort when the speculum is inserted. After the IUI procedure, progesterone( a hormone )which supports pregnancy is prescribed. You can take a pregnancy test two weeks after the IUI procedure.

What are the risks?

There is a very minimal risk of infection following the IUI procedure. Your doctor will use sterile instrument so infection is very very rare. Sometimes the medicines used to induce ovulation will lead to formation of more than one egg, if more than one egg is released there is also increased probability of multiple pregnancies. Your doctor will try to balance the amount and type of medication so that multiple pregnancies can be avoided. Sometimes the ovaries over respond to fertility medications especially if injections are given and a condition called ovarian hyperstimulation syndrome can occur. In ovarian hyperstimulation syndrome the ovaries may get enlarged, fluid may collect in abdomen. In very rare cases, fluid may collect in chest and abdomen, kidney problems, blood clots and twisting of ovary can happen.

Every couple will have a different response to IUI. An exact success rate is difficult to predict. A number of factors affect the outcome like • Age of female • Underlying infertility cause • Whether fertility drugs are used • Other underlying fertility concerns. Pregnancy rates following IUI are different based on your reasons for needing fertility treatment. Success rate for IUI tends to decrease as the woman increase in her age, any woman who have not gotten pregnant after three cycles of IUI . In best possible scenarios the success rate of OUI ranges somewhere between 12 to 18%. You must discuss your predicted success rate with your fertility specialist to see if this is a good option for you.

How much does IUI cost?

The cost of IUI treatment can vary based on your treatment protocol. It is cheapest in natural cycles and the cost increases if ovulation-inducing medicines especially injections are used. At our centre cost of IUI typically ranges from rupees 5000 to 10,000. Take home message Intrauterine insemination is a relatively low-cost, low-risk, patient-friendly IUI treatment that can be a wonderful option for many couples. If you are finding it difficult conceiving or you have questions about your options for conception, speak with your fertility specialist. Your doctor can help you determine the best course to achieve pregnancy, and IUI may be an effective route.